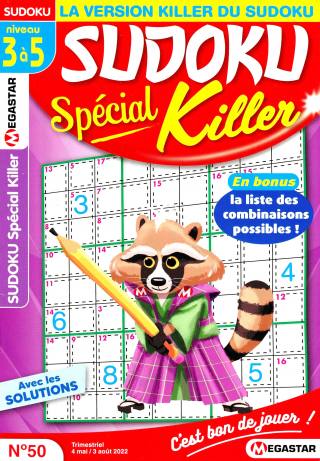 In Sudoku Spécial Killer, the rules remain the same. A grid of 9×9 spaces. In the rows and columns are 9 “squares”, composed of 3 x 3 spaces. Each row, column and square must be filled with the numbers 1-9, without repeating any number in the row, column or square.

The new feature is the presence of dotted areas that can overlap several blocks, rows and columns. Each dotted area has a number that is the sum of the numbers inside the area. But be careful, this area cannot contain the same number twice.

Has Sudoku become a breeze and do you want to take on a new challenge? Then don’t hesitate — take on Sudoku Spécial Killer and its 60+ grids. Can you do it? Of course you can! Become an even better Sudoku expert.

Sudoku does not require any special math or calculation skills. All that’s required is a mind and plenty of concentration.

Are you a game fan? Check out our complete catalog of games: case-based, arrow-based, other.

Receive your games wherever you are! We deliver to 190 countries! Our catalog is also available in French and English.

We use cookies on our site to measure and analyze the audience anonymously. Of course, the use of these cookies cannot take place without your consent. To give your consent, please click on "Accept & Continue". You can find out more about which cookies we are using or switch them off in settings.

Except for the cookies which are required for the operation of the website, the cookies and similar technologies used on our website are only usable with your permission. You can freely give/refuse or remove your consent as desired.

Strictly Necessary Cookie should be enabled at all times so that we can save your preferences for cookie settings.

These cookies allow us to establish a profile of your interest and to suggest more pertinent targeted ads. The cookies also allow to determine the numbers of visitors and the origins of the traffic, so we can measure and improve our website.
These cookies don’t collect information that identifies you. All information these cookies collect is aggregated and therefore anonymous.

Please enable Strictly Necessary Cookies first so that we can save your preferences!