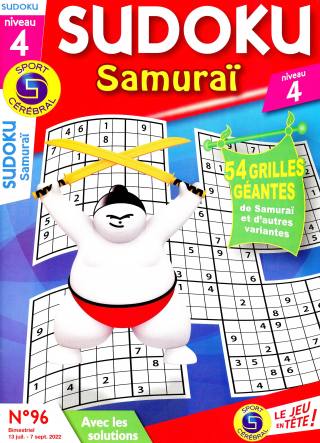 Have a blast with Sudoku Samuraï level 4! As we all know, there are loads of varieties of Sudoku. Here, subscribers will find games like Sudoku marathon, kamikaze. The perfect challenge for Sudoku enthusiasts! Plus, you’ll be treated to over 50 different game grids in your Sudoku Samuraï level 4 !

Sudoku is a mathematical grid game that tests your logic. No two numbers are to be found more than once in the same row, column or region. There are different names such as “block”, “group”, “sector” or “subgrid”. In addition, the symbols involved are numbers from 1 to 9 with regions arranged in 3×3. There are some numbers already placed in the grid, which allows a progressive resolution of the game.

This game was created in 1979 by Howard Garns, but inspired by the Latin square game by Swiss mathematician Leonhard Euler. It’s grown to be well-loved all over the world thanks to the simplicity of its rules and in the complexity of its solutions. The grids all boast different levels of difficulty. The editor can indicate a probable solution time, but everything depends on the player’s brain-power!

Did you love your Sudoku Samuraï level 4 review? Don’t hesitate to check out the other game magazines in our vast catalog. Our site is also available in French, and we ship to 190 countries all over the world.

We use cookies on our site to measure and analyze the audience anonymously. Of course, the use of these cookies cannot take place without your consent. To give your consent, please click on "Accept & Continue". You can find out more about which cookies we are using or switch them off in settings.

Except for the cookies which are required for the operation of the website, the cookies and similar technologies used on our website are only usable with your permission. You can freely give/refuse or remove your consent as desired.

Strictly Necessary Cookie should be enabled at all times so that we can save your preferences for cookie settings.

These cookies allow us to establish a profile of your interest and to suggest more pertinent targeted ads. The cookies also allow to determine the numbers of visitors and the origins of the traffic, so we can measure and improve our website.
These cookies don’t collect information that identifies you. All information these cookies collect is aggregated and therefore anonymous.

Please enable Strictly Necessary Cookies first so that we can save your preferences!